Suddenly, everyone in the media is talking about halal meat.

The issue of British citizens being sold halal meat – supposedly unawares – has made the front pages of both The Sun and the Daily Mail. 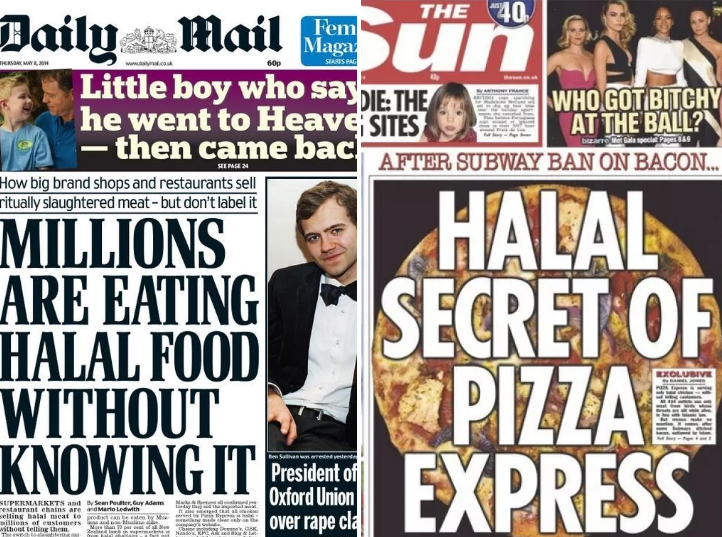 1. Right. So what are people so angry about?

Some people – or at least Sun/Mail journalists – are upset because they believe that high-street stores serving halal meat is contributing to the so-called Islamisation of Britain, a process where Islamic cultures and traditions are imposed upon the rest of British society.

There are others, however, who have ethical concerns with halal meat. They suggest animals are killed in a more cruel manner when compared to other methods.

2. What do Muslims think about the whole thing?

On the whole, Muslims were initially bemused. The idea that Subway serves halal meat in some of its restaurants is pretty clear to anyone who looks at the door while walking into a store and Pizza Express has been fairly explicit about serving halal chicken on its website and on Twitter.

But once there was a stream of articles, many Muslims felt as though they were being attacked. The Daily Mail feature about supermarkets selling unlabelled halal meat is a story they have written several times before, and was on their splash four years ago.

Most Muslims, however, don’t really understand the anger surrounding the issue. Although they appreciate the sentiments around businesses offering halal meat – and this is because Muslims have responded well to the introduction of halal food in chains such as KFC – they didn’t exactly raise huge petitions around trying to get your local Tesco’s to sell halal meat. They were perfectly content with finding a halal butcher and buying meat from there or going to another restaurant that served halal meat.

3. OK, take a step back. What’s the difference between halal meat and non-halal meat?

According to Islamic traditions, before being slaughtered, God’s name should be pronounced over the meat as a show of appreciation. Then an animal is killed in one swift cut to its throat to ensure its blood is drained from its body. This is because traditions state that blood can be harmful to the human body and should therefore be avoided.

Halal food regulators say the animals should be healthy and treated well before they are killed. For example, “the animal must never see another animal being slaughtered nor must it ever see the blade being sharpened,” according to The Halal Catering Company.

Animals that are not slaughtered by religious means are killed in a variety of ways. Poultry, for example, is stunned before being guillotined by a machine, according to the Royal Society for the Prevention of Cruelty to Animals. Larger animals, such as cattle, are stunned previous to their throats being cut.

4. So the big issue is around stunning. Why’s that?

It’s because animals that are stunned prior to being killed do not feel any pain when they are killed, according to research by the Farm Animal Welfare Council and researchers in New Zealand.

There are currently debates amongst Islamic scholars about whether or not it is acceptable to stun an animal before it is killed. Since stunning wasn’t part of the tradition, it doesn’t feature in the Islamic guidelines. Although more orthodox Muslims believe an animal cannot be pre-stunned, the majority of halal meat in the UK is stunned before it is killed.

There are a number of different companies that certify whether or not something is halal. The Halal Food Authority is one the largest of these organisations and says that both poultry and ovine meat can be stunned. It is adamant, however, that animals should not be stunned to death.

5. And just how many animals don’t get stunned before they are killed?

It’s worth noting that in the latest animal welfare survey, from 2012, 88% of poultry slaughtered according to Islamic regulations was stunned before being killed. So the scale of the problem is much smaller than is being claimed.

That does mean, however, that a little over half a million poultry were not stunned before being killed. You can read more information about cattle, sheep and goats here.

6. But people should be told quite clearly what they’re eating, shouldn’t they?

It makes sense for people to be told about what they’re eating. That’s probably why religious leaders have written in to the Telegraph to call for clearer labelling on food packaging.

Animals that are stunned before killing do not have to carry a halal tag, according to the British Retail Consortium. This means supermarkets do not label all meat that has been killed according to halal traditions.

In their letter to the Telegraph, religious leaders from the Jewish and Muslim community expressed a need for all meat to be clearly labelled with how an animal was killed: “They should also be told the method of slaughter: captive bolt shooting, gassing, electrocution, drowning, trapping, clubbing or any of the other approved methods.”

The leaders also questioned the extent to which Brits are concerned with how meat is slaughtered, considering the relative similarities between the various techniques.

“If two chickens reared in exactly the same conditions are both electrocuted until they are unconscious, ” the letter reads, “and then one goes into an enormous machine which scalds, feathers and decapitates it, while the other goes to a Muslim who happens to be reciting a prayer, why are critics quite content with the former but up in arms about the latter?”

Having only ever eaten halal meat, I can’t say. I do have a few non-Muslim friends who prefer to buy halal meat. But that might just be because it’s often cheaper.