A unique movement has brought two very different communities together. In solidarity with each other, the Latino and Muslim communities come together in Sacramento over tacos as part of the #TacoTrucksAtEveryMosque movement.

From Ramadan to Throughout The Year

#TacoTrucksAtEveryMosque is part of a series of events started by Latino Muslim Unity during Ramadan three years ago. The concept is very simple: sit down together, eat halal tacos and embrace each other’s identities in a time when everyone is trying to erase those identities. “Justice is not just about us,” said Rida Hamida, founder of the movement. “When we’re fighting for justice, we fight for all of our rights, especially our civil rights.”

The grassroots movement started three years ago to combat anti-Muslim and anti-Latino campaign rhetoric. The name of the event is a clever pun on a quote from the infamous Mexican Marco Guiterrez, founder of ‘Latinos for Trump’. He said on national television that America would have “taco trucks on every corner” if Latino culture isn’t stopped. His speech gave local Muslim activist Rida Hamida and Santa Ana Valley High teacher Ben Vazquez the idea to convert his delirious quote into a fruitful campaign to unite two communities whose individuals have been frequently targeted in the wake of the Trump’s presidency. 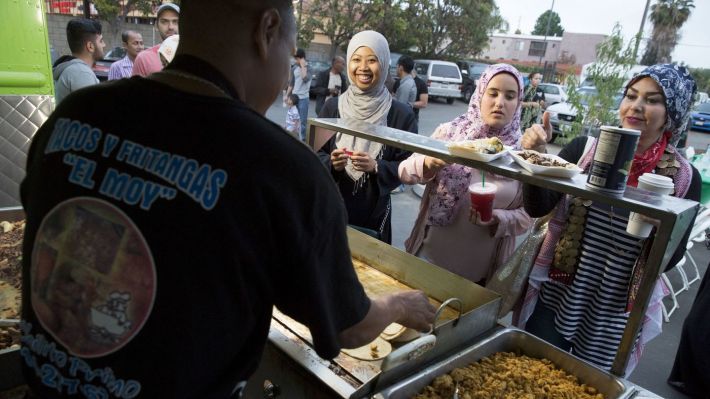 Not all Muslims are Arab

The organisers have toured Southern California, and even crossed the border to a mosque in Rosarito, to bring the Latino and Muslim community together in celebration of their identities. Many other organisations, such as Resilience OC, a nonprofit group pushing for partnerships between law enforcement and immigrants, have also partnered to further extend the campaign.

In an interview to Here & Now, Hamida said: “It’s really important in this movement to understand that not all Muslims are Arabs. Muslims are everyday people — they’re Asians, they’re African-Americans, they’re Latinxs — so, it’s hard to say that this is the first time that Latinos and Muslims are sharing a meal, because we’re everywhere.” She also described the event as a simple act of unity during contentious times. “Latinos and Muslims are fighting hate in the most delicious way, one halal taco at a time. Take that Trump! We are united by taco trucks at every mosque!”

The #TacoTrucksAtEveryMosque event is attended by various other communities, including Jews, Catholics, Asians, LGBT and others. Unity between different communities is also what the organisers wanted to encourage, deliver the message of better understanding each others’ culture which is often absent in our history books and overruled by prejudices in everyday life.