It’s that time of year again: once again, Cadbury is once again spending a lot of time explaining why its chocolate is halal, in response to questions from low-watt bulbs on Twitter.

Lots of people are convinced this is some kind of sharia conspiracy which will lead to Easter being banned or something, and constantly pester Cadbury about it. (Wait a couple of weeks and the same people will be complaining that Easter eggs no longer say Easter – all part of the same sharia conspiracy by Cadbury, you see). Of course, halal doesn’t quite mean what these people think it does: ie it doesn’t mean that the food has been specifically designed for Muslims. 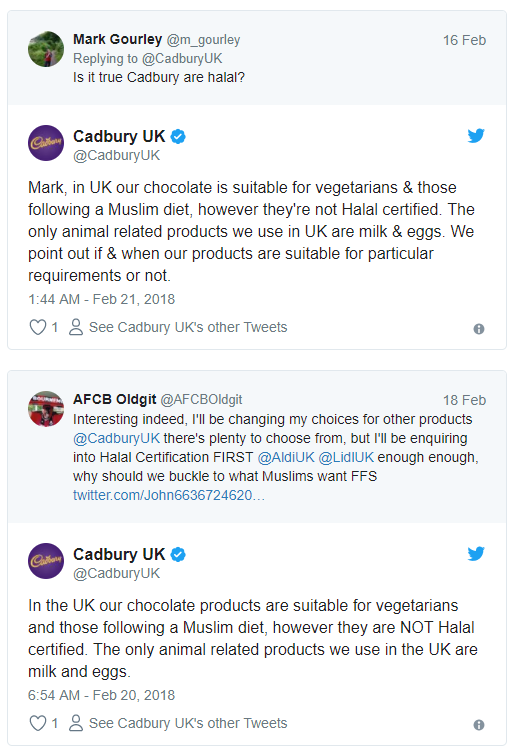 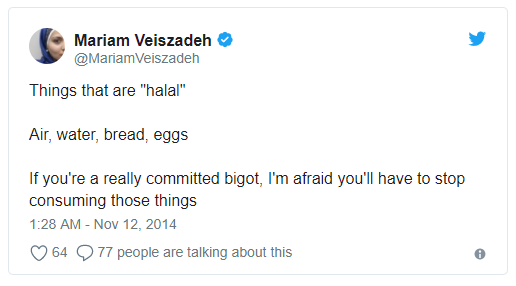 Cadbury’s chocolate isn’t halal-certified in the UK, but it is halal. ‘Halal’ means ‘permissible’ and refers to a whole lot of things accepted under Islamic law (not just food). Water is halal, for instance. As is air. It’s often associated with meat because Islam sets out that animals should be slaughtered in a specific way.

Cadbury doesn’t halal certify its products in the UK, as they don’t include any animal products bar milk and eggs.

Last year, the floodgates opened after someone unearthed a photo of Cadbury getting a halal certificate in Malaysia. outrage started when someone shared a picture of a man holding Halal certificates in front of a Cadbury’s sign, with the caption: ‘Cadbury proudly displaying their latest new Halal certificates, pass it on.’

The image appears to have been taken back in 2014 and featured in an article about Cadbury Malaysia being given official Halal status following questions about whether the company’s chocolate contained pig DNA or not.

But as soon as it was re-shared on Twitter, people started complaining to Cadbury UK, demanding an explanation as to why chocolates here are halal. Cadbury UK was forced to respond to users, explaining: ‘None of our UK products are Halal Certified and we have never made any changes to our chocolate to specifically make them halal.

‘They are just suitable for those following a halal diet in the same way that standard foods such as bread or water.’ To be clear, cow’s milk is nearly always halal as it does not involve the slaughter of animals or swine (pigs). It’s only when gelatine or other animal products are used in Cadbury products that halal certification is needed. Asda milk’s halal status was questioned last year. Cadbury Malaysia and Cadbury Australia, for example, each have information about their halal certification.

The halal way of slaughtering animal is criticised by some who say it is an inhumane way of killing animals.

This is certainly a “catch-22” situation for Cadbury. They don’t want to lose their Halal consumers but at the same time don’t wish to be halal certified due to criticism they will face.